The 308 and it’s use with subsonic and supersonic ammunition utilising a faster twist barrel.
The 308 is one of those rounds that just does so many things. But one of those things I’ve never succeeded very well with is getting subsonic rounds to hit the target with any accuracy. Infact with the Lapua Subsonic bullets I would have done well to hit a barn.

To get a bullet to stabilise where the twist rate is marginal, like a 1:12 308 barrel shooting subs, you can overcome it with the shortest fattest bullet you can find. The ideal shap for stabilising would be a flat topped and bottom cylinder, the worst shape to stabilise would be a pointy bullet with a boat tail. So in the early days of experimenting, I found the .308 220 gr InterLock® RN from Hornady perfect. Its extra weight helped with energy as well. Remember we cannot get extra energy from velocity as we are always just below the speed of sound, so velocity remains constant. They work well but do not expand at these velocities.

Now, however, bullet manufacturers are making some subsonic bullets that are designed to expand at subsonic velocity. Notably Hornady, Nosler and Federal. This is primarily due to the 300 blackout. But this means great news for 308 owners, or does it?

Both Hornady, Nosler and Federal make some superb 308 bullets designed for expansion at subsonic velocities however both really need a twist rate of better than 1 in 11. This sees most existing factory 308 with a 1-in 12 or 1 in 13 unable or struggling to stabilize these bullets.

So rather than try and use a factory rifle I thought we would attempt to make the perfect 308 barrel for the 1996 Accuracy International we have.

Clearly the primary consideration is twist rate, and we went for a 1-in 8. This allows us to stabilize any bullet up to about 250g and will easily stabilize the current factory subsonic expanding bullets which are either 190 to 220 grains.

The second consideration is length, and we went for a 16-inch barrel. As we were building this primarily as a subsonic barrel, we saw no reason in having a longer barrel than necessary as we are not looking for extra velocity. We have also designed the barrel so that we can put an integrated suppressor on it in the future, hence the shoulder at the back. See the images of the completed rifle.

So testing the rifle, we started with factory supersonic rounds just to check all was well and it worked with these as a benchmark. We compared to the original Accuracy International barrel in 308 that was a 1-in 12 twist and 24 in long to the new fast twist 16. First test was to try the difference between standard factory supersonic ammunition. We chose the excellent 168 grain TAP rounds from Hornady. We they are known to shoot incredibly well in the factory 24-inch barrel and have a good supply left. Accuracy was spot on with both barrels, the 16 proving very accurate and nice to shoot and a great length with the Barton Gunworks suppressor installed. What we found quite surprising is that we only lost 50 fps going from the factory 24-inch barrel to the new subsonic 16-inch barrel. So for supersonic ammunition this barrel proved to be an absolute winner because we could shoot factory ammunition at virtually all its velocity with such a short barrel in a short handy package.

We did not drill out the flash holes, or any other peculiar case preparation, as we have had experience of loading subsonic ammo before and never seen the need. I also believe it adds extra complexity that just is not required and you need to be careful to keep these cases separate in the future is you do drill them out.

So the powders we used and found to be the best were high volume powders to fill the case as much as possible with such a small weight of powder. Hodgdon “ tite group” and Vhithavouri N320. Both powders require about 10 grains of the N320 and 8.5 grains of the tite group, to send the bullets out of the barrel at subsonic velocity. Not a lot of powder, but we have found it to be safe without the use of fillers. With both powders just standard CCI 200 primers were ideal.

We found the best way to get the correct load, to achieve subsonic velocities, was to use our ears rather than a chronograph. We started with a slightly higher load than we expected of powder and actually worked down until the bullet was audibly quieter and had no supersonic crack as it went across the field. Clearly a check with a chronograph does not hurt. The speed of sound (depending on temp and pressure and some other finicky stuff) is 343m/s or 1125fps. To be quiet as possible 1050 fps works the best for us. The assumption is higher than this some parts of the bullets are producing a shock wave and therefore make an audible noise. Though that is supposition.

The 1-in 8 twist barrel gave remarkable accuracy at 100 m with a typical group size of just under 25 mm or 1-inch easily with both the Hornady, Nosler and the Federal bullets. The Nosler and Federal bullets being slightly heavier deliver ~10% more energy.

The formula for muzzle energy is ½mv². And because we’re making subsonic ammunition all the velocities are effectively the same at just under the speed of sound. So, to give a good example of the energy of a subsonic 308 we need only consider that the weight of a 22 rimfire bullet is 40 grains and where shooting a bullet of 190 grains. Therefore, the energy of the subsonic 308 is only about 4 ½ times the energy of a 22 rimfire, with surprises many people. And in the UK is nowhere near the legal energy requirement for shooting deer.

Again, we can use the analogy of a 22 rimfire as the velocity is the same with subsonic ammunition. Most shooters have a familiarity with the 22 rimfire and know that the drops and extended ranges are huge. The drop on the 308 subsonic is exactly the same to all intents and purposes as the 22 rimfire so when we zero the rifle we need to be very specific about the distance we at and any shots that we take at any other distances must be carefully measured and a drop table referred to if we want to hit something with any accuracy. 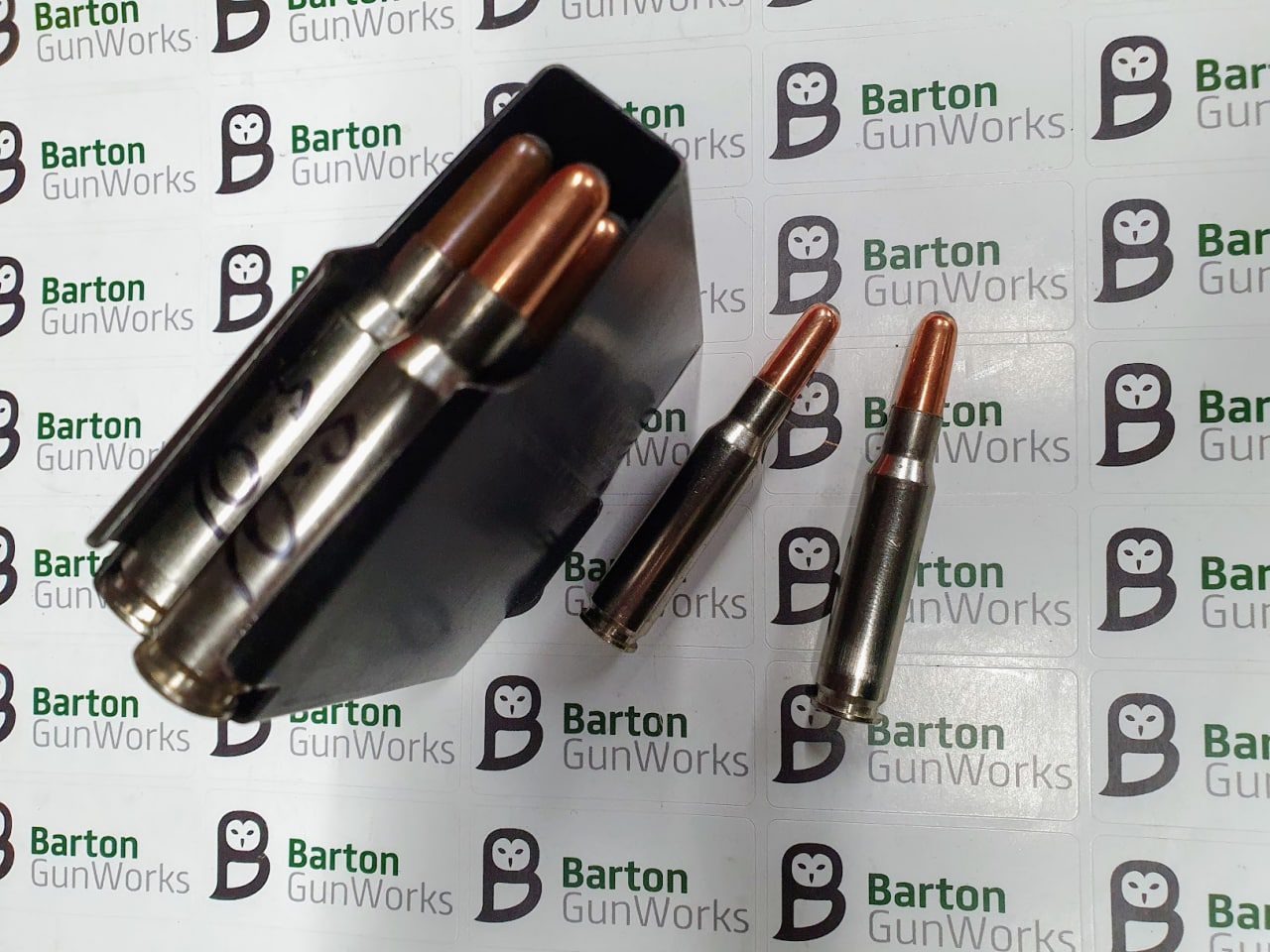 So as an experiment the 16 in 308 barrel with a 1-in 8 twist is incredibly successful. We can shoot factory ammunition and home loads at supersonic velocity with almost as much velocity as a much longer barrel and equal accuracy. Indeed, because we used an HS precision barrel are accuracy is actually increased. So with one rifle we have an enjoyable and flexible rifle where we can use supersonic ammunition to legally shoot deer In the UK and any other quarry we wish and were needs be shot quietly with accuracy at subsonic velocities. We just have quite a comprehensive drop table for both sets of ammo!

All of testing was carried out using a Barton GunWorks accurate enforcer moderator where we were shooting subsonic ammunition or supersonic ammunition.

Just be careful and use you own common sense and experience of reloading. If in doubt as always, when it comes to reloading, don’t.